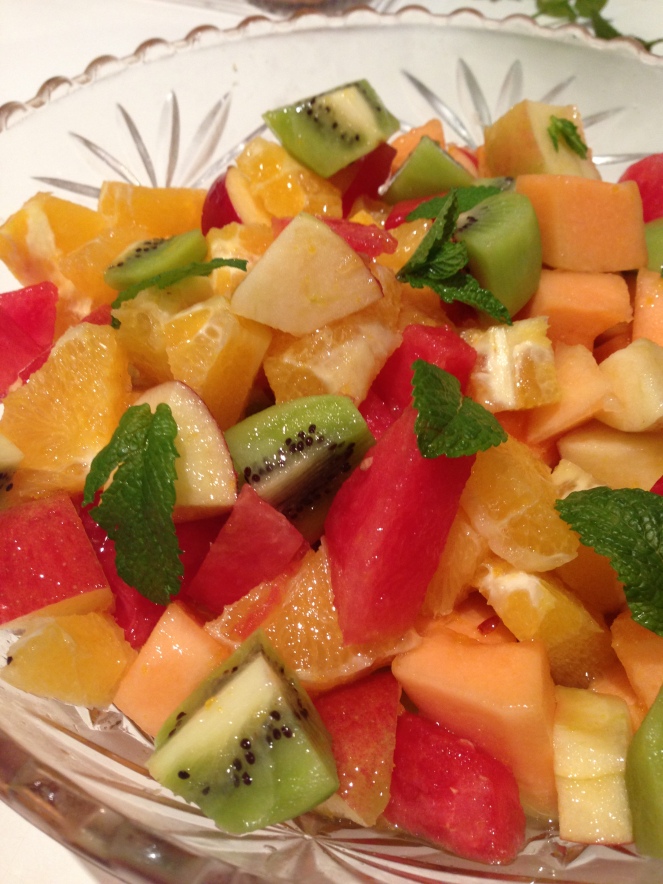 We load our crispers enthusiastically as the week opens with good intention, virtuous feelings of nurturing and nutritional piety – and abundance of fruit. By mid-week, health promises and resolutions lay broken like pie crust and the crispers are still groaning. As you stare down the barrel of the coming week-end, with fruit in quantities far too excessive to clear out into unsuspecting lunchboxes, it’s time for fruit salad.

And this week, we did just that. An assembly of refrigerator pickings gathered on the chopping board. After the halcyon days of summer stone fruit, what now remained was a fairly pedestrian selection. However, once the ‘pedestrians’ were chopped and a few early winter newcomers were included, we had quite a sunny bowl before us. Topped with a delicious orange syrup, helpings disappeared in record time.

As a result, the crispers were cleared, nutritional equilibrium was restored and children retired to their beds on bowls of fruit rather than ice-cream. I’d say some self-righteousness was in order.

But before I topple off the edge of this moral high ground, here is how to produce the lovely, sweet orange syrup that covered it all…..

Postscript: As we prepare to undergo the next season of Masterchef where no doubt we shall be encrusted, caramelised, deglazed and trussed, at least we know that performing the ‘chop, mix and pour’ trilogy will have us savouring fresh produce at its simplest and best.